The honey-coloured yellow walls brightened the living interiors, spotlights beaming at his paintings. Like a mini art gallery, his works of art formed a cultural mosaic that made its way through each room, from the moment you walk in. “Maestro” Romeo Mananquil, also known as Romi, invited us to his Mississauga residence, his home radiating familiar warmth, as each painting imbued a sense of nostalgia, drawing back to his roots of Philippine subjects and landscapes, recounting his life experiences as a young boy in his homeland. 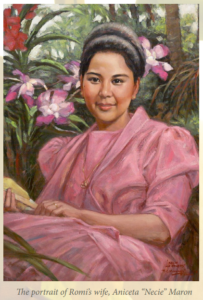 Breakfast by the Beach displayed in the dining room showed strokes of his impressionistic style that depicted the simple life of a couple. Another painting stopped me in my tracks, as I gazed carefully at a beautiful portrait of a young woman, in seated pose, wearing a salmon-pink coloured dress, looking directly back at me. It hung in the main living area, and soon as I look to my right, I quickly realized that it was a portrait of his wife, Aniceta “Necie” Maron, whom he has five children with: Roani, Jordan,
Anicee, Herson and Maila. At that moment, she was busy in the kitchen, an older version of herself, but still looking radiant and lovely.

Mananquil, eldest of five children, was born on December 1, 1942 in Caloocan, Rizal. As a young inquisitive boy, he discovered his calling to become an artist at an early age, when he found a stock
room at his aunt’s house. Fascinated, he rum-maged through stockpiles of old Liwayway magazines with Amorsolo covers and Carlos Francisco illustrations. In those pages he found a watercolour painting by his father of the Caloocan town hall, “So nagulat ako. Nag pa-paint pala ang tatay. I was so fascinated by that. Parang nagkaroon nang desire, on my part, to be an artist, parang gusto kong mag drawing kaagad,” Mananquil narrated. Thereafter, he hurried to the store, purchased bond papers from five centavos and started drawing, “Ever since, hindi na ako tumigil,” he said.

And he kept going.

While still a student, he started illustrating for Liwayway. He was later hired as Staff Artist/Illustrator, and later on became one of the top celebrated illustrators, along-side with veteran artists Rodolfo Herrera and Amado dela Cruz, commissioned to do paintings that were used as covers for special issues,. During that time, Mananquil popularized the dry brush technique that caught fire, “Instead of applying the ink in full, ginagawa ko, ipapahid ko muna yung excess sa isang papel. Pag meron nag texture, yun ang ginagamit ko,” he explained. By the late 1970s to early 80s, Mananquil worked as professor and chairman, at the Department of Visual Communications, U.P. College of Fine Arts.

“ I always love my mother country.
And I always miss living in my country.
All my life I really wanted to be an artist. “

He also held Illustration and Cartooning classes at the College of the Holy Spirit in Manila later on. Since his 1976 first one-man show at Rear Room Gallery, Mananquil had participated in more than
100 group exhibitions in the Philippines, Australia, United States, and Canada.

One of his career highlights was when Banko Sentral ng Pilipinas (Central Bank of the Philippines) hired him to design bank notes and coins with two other artists. ”To me that was a very singular honour because there were so many artists in the Philippines, and yet I was sought out. It was truly a huge honour. Lahat ng Pilipino makakahawak ng trabaho ko,” he humbly expressed. Mananquil designed the first two-peso Bonifacio decagonal coin, the Balagtas 10-centavo coin, the one-peso tamaraw coin and the Tandang Sora five-centavo coin, including the discontinued green five-peso Aguinaldo bank note, the trihero 1000-peso bank note, and interestingly, a 500 pesos Marcos bill that never circulated.

Mananquil’s flowering career blossomed in the Philippines, amidst growing political instability and social unrest at the height of the Marcos movement.

In the 1980s, when his career was gaining momentum, he made the difficult decision to leave the country and relocate his family to Canada. “The biggest factor was the safety of my family and my kids.
Because at that time nga, medyo magulo na. Puro rally. Marcos was so unstable, and sabi ko, I don’t know what future we have here, so might as well go and try my luck in Canada,” he said. His friendship
with the Canadian Consul General at the time helped him facilitate his immigrant visas to start a new life.

Fast-forward years later, Mananquil was hired as a part-time art instructor for Watercolour & Oil  Painting at the Hilltop Community for Continuing Education in Etobicoke, and later conducted workshops for the Etobicoke School of the Arts. One of his major contributions is to reorganize the group and became one of the founding officers for the Philippine Artists Group (PAG), a community of Filipino artists. Their mandate is to showcase Philippine visual arts through art exhibitions. Mananquil
served as its first president and held the title for 14 years. 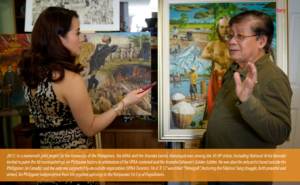 With more than 40 years as an artist, and a slew of accolades and trophies honouring his work, Mananquil also became either a member or affiliate of many associations such as the Society of Philippine Illustrators & Cartoonists (SPIC), grUPo (Artists from U.P.), and Art Association of the Philippines (AAP), among many others. Notably, he was among the recipients of the Queen Elizabeth II Diamond Jubilee Medal in 2012; and was one (for Visual Arts) of the five recipients of the ASNA Award trophy and certificate, the highest and most prestigious award to outstanding Pangasinenses given personally by Governor Amado Espino at the highlight presentation ceremonies of the 433rd Founding Anniversary of Pangasinan in 2013.

In that same year, he was given a Plaque of Recognition and Conferment of the title ‘Maestro’ through the Philippine Department of Foreign Affairs by Ambassador Leslie Gatan and then -Toronto Consul General Junever Mahilum-West, during the formal opening of the 25th Anniversary Art Exhibition of the PAG.

His career may have taken a turn into a new direction once he migrated here, but the success still followed him, and his passion remained unceasing, “I always love my mother country. And I always miss living in my country,” Mananquil stated. “All my life I really wanted to be an artist.” Sabi ko nga sa nanay ko either I take art or I don’t go to school. And in a way, I was able to prove to them that I was right,” he said, with the only tinge of wonder where his career would have taken him if he had stayed behind in the Philippines. Yet, in exchange for what he sacrificed, he also had much to gain.

Today, Maestro Mananquil spends his time with his wife and big family, enjoying the simpler pleasures in life, and of course, you will find him in his basement studio, “Sabi ko hanggang kaya ko, I will paint.”