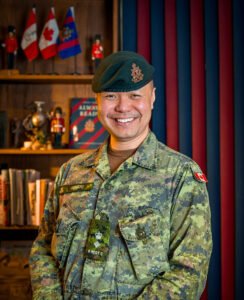 Lt.-Col Joseph Nonato shares how he leads the Royal Regiment of Canada, the largest and oldest regiment in the country

Lt.-Col. Joseph Nonato felt a big gaping hole in his heart for years. It was never filled until a trip to the Philippines a decade ago. During his deployment in Afghanistan, he chose to visit the country where his parents were from as a side trip.

From then on, Joseph said it became important to never lose the connection between Canada and the Philippines.

Joseph is a first-generation Filipino-Canadian. Although his parents, Rod and Nancy, instilled Filipino values in their arnis-loving son, Joseph said he only fully understood his heritage during that side trip to his parent’s homeland.

Joseph is now the first Filipino-Canadian to lead the Royal Regiment of Canada, one of the country’s oldest and largest troops. Coming into his first-year anniversary since his appointment, he shares a few leadership advice from his experience, not only in the military but also as a teacher, father and most of all, a man of great faith.

“I saw my parents going to daily mass and they would take their faith seriously. The way they ran things in the house: It was grace before meal, grace after meal, going to mass, pray the rosary. It was just like breathing. It was nothing strange about it,” recalls Joseph.

And this is the very foundation of the commanding officer’s values. The father of two young daughters rarely missed going to daily mass and even considered priesthood at one point.

But apart from faith, his parents also instilled the value of service.

He describes his father’s ‘great love’ of the military back home. Rod took up nautical science before moving to Canada and got accepted in the Philippine navy. But he got his acceptance letter when he already settled here. So, the older Nonato would tell bedtime stories to his children about the Philippine Military Academy. Cousins and uncles would tell wide-eyed Joseph about stories in ROTC and the Japanese occupation.

“My grandfather spent a little time in the resistance and you’d hear stories about how the Japanese would come in and how they would abuse people. Or how my grandmother had stockpiled rice in the ceiling. Then the Japanese came and everybody else was starving so they were sharing rice with everybody else.”

These stories never turned Joseph away from the military. Instead, he became eager to serve by the time he was Grade 8. He and his father started plotting their plan in getting him into Westpoint.

“When I was growing up, there was no awareness of Canadian military.”

But when he learned that he has to make an oath of allegiance to the American flag, he said, “No, I’m Canadian.”

There was a change of course. He joined the local cadet core in Brampton where his family settled.

“That started off this being in uniform thing,” smiles Joseph sitting comfortably in the Lieutenant Colonel’s chair in the living room of the reserves, or what is referred to as the Officer’s Mess, at Fort York.

He set his eyes on the prestigious and highly competitive Royal Military College where he took up Politics. Joseph taught in Mexico then worked at Scotiabank as a manager before becoming a private school teacher. He taught in The Philippines during periods of leave. At De La Salle College “Oaklands” in Toronto, he teaches church history, religion and social studies.

“Please don’t promote me until I got deployed,” pleads, Joseph to his then commanding officer nearly a decade ago. “I made it sort of an unwritten stipulation.”

Lead by example is his first rule in leadership. He feels his credibility would be questioned if he doesn’t practice his craft.

Chief Warrant Officer Vishnu Persaud, Joseph’s second-in-command, reiterates the importance of their guiding principle. “Whenever we go to the field, we don’t stay by the barracks, even though by rank and appointment, we are entitled to,” Vishnu says.

“Our leadership philosophy is we can’t be in front of our soldiers unless we share the same hardship as they do.”

“You can ask for an honest opinion and get it and still feel valued.”

This attribute became useful during Joseph’s deployment in Afghanistan. As the NATO forces were looking for ways to counter ISIS’ propaganda, Joseph came up with the idea to listen to the mullahs, or Muslim leaders, and connect through their faith.

“I love God. You love God. I’ll watch you pray and you watch me pray and we’ll both learn from each other.”

Joseph, who looks up to Gen. Douglas MacArthur, says that trials come around in commanding 250 primary reservists but he’s grateful he has a group of people giving him advice.

“Find a good team and people who think like you.” Because, he says, the regiment becomes your family. “We look out for each other and we take care of the younger soldiers.”

Just recently, a young soldier came up to Vishnu and Joseph for advice as he was welcoming his newborn. The officers were one of the first to visit the baby and shared fatherly advice to the young couple.

But in the end, it is all about service.

“In the army, we have a tradition where the highest rank eats last. I would not eat until everybody had eaten…It’s a competition of service in the truest form of leadership.”

If you are interested in joining The Royal Regiment of Canada, here are the requirements: Be a Canadian Citizen, Bet 16 to 54 years old, Have completed Grade 10 and Be free of any legal obligations. Call 1-800-856-8488 or Go to www.forces.ca