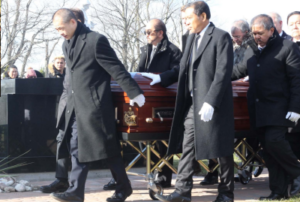 SENATOR TOBIAS ENVERGA JR. may be considered one of the most Illustrious Filipino-Canadians in this country. He was the first FilipinoCanadians to serve in the Senate of Canada after his appointment to the red chamber by then Prime Minister Stephen Harper five years ago.

I will not forget the first time I was introduced to the Senator in one of those event invitations in Toronto in early 2014. First impressions indeed last. The way he smiled at me and shook my hand, revealed a man seasoned by experience and devotion to the community. The one thing that struck me was his humility. He blended perfectly well with the people around him, comfortably mingling with anyone in the room.

Senator Enverga began to regularly invite me to his community events and I did the same at my events in Durham Region. The Senator regarded me with as much respect as anyone else. He was fatherly, polite, caring and friendly. He removed any barrier between him and the people around him. Once in Durham Region, he would stand up and walked around, introducing himself. Despite
his busy schedules, he would show up on my events if I wanted him to welcome guests from the Philippines. As a Filipino-Canadian, I was proud of him.

He was our voice in the Senate of Canada and the first Filipino ever appointed as Senator. He was our rightful representative, no matter how detractors portrayed him. I could see a man of utmost dedication to service and unfathomable passion to serve his people and adoptive country, Canada. He tirelessly made himself visible and available to the community at large. His presence and constant accommodation of invitations may have taken a toll on his own health. Senators are not elected so there was not enough reason for him to be mingling with the community. He could just go to his job as a Senator and retire at home with his family. But he was a devoted man.

He was the uplifting spirit who told the world that our race can go higher and elevate our status from among the many in a diverse country by representing the Filipinos in Canada’s Upper Chamber. His role and participation in the Senate is insurmountable, including these highlights of his career as Senator:

Senator Tobias Enverga Jr. introduced legislations and further debate on many important topics such as the Government Bill C-40, giving Torontonians easy access to 58 km of forests, meadows, wetlands and farmlands. This bill passed both the House of Parliament and became law in April 2015. The Senator also introduced a motion to formally establish the practice of singing the national anthem “O Canada” at the beginning of Senate sitting each Tuesday.

Enverga was the constant advocate for people with disabilities and supported many groups. Notably an Opposition critic, Senator Enverga’s support was instrumental in allowing Bill C-11 to become law which facilitates access to published works for persons who are blind, or visually impaired, or otherwise, print disabled. The Senator also recognized National Vision Health Month in the Chamber. He co-hosted an event in Parliament in raising awareness on this issue in correspondence with the Canadian Institute for the Blind. Senator Enverga was also a strong supporter of Down Syndrome Awareness speaking in the senate on World Down Syndrome Day every year on his first five years at the Upper Chamber. An outspoken ally of the caregivers, he made the government accountable by asking passionate and thoughtful questions on the plight of caregivers separated from their families. The Senator voiced his strong opposition against a bill that established physician avenues for assisted dying through Bill C-14. Although this has become law, the Senator remained vocal on principle that life should end naturally. He was a pro-life advocate and a proponent for adequate palliative care for Canadian seniors and elderly.

Enverga was also a member of various Standing Committees, namely; Social Affairs, Trade and Commerce, Banking, Science and Technology, Rules, Procedures and the Rights of Parliament, Aboriginal Peoples, Agriculture and Forestry and Fisheries and Oceans. It is within these Committees that most of the Senate’s work takes place.

These Committees have tabled numerous reports and recommendations that touch on a number of different pieces of legislations. He accomplished many works as member of these committees. He joined the Trade Mission in the Philippines. During his first year in the Senate, the Senator was co-chair of Canada-Philippines Inter-parliamentary Group.

Through his hard work and the importance of this group of Parliamentarians that the historic first raising of the Philippine and the Canadian flags took place on Philippine Independence Day, June 12, 2013. Through Senator Enverga’s good work aided by the Canada-Philippines Inter-parliamentary group, the tradition of celebrating Philippine Independence Day in the Parliament Hill
continues. During typhoon Haiyan, Enverga proved his unselfish desire to help by sending aid to the victims. He rallied the community and the Canadian government to respond to the needs of the Haiyan aftermath. He was in the thick of it all ensuring that Canada and Filipino-Canadians worked collectively during this tragedy back home.

In the summer of 2017, Senator Enverga hosted the Philippine Cabinet Secretary Hon. Leoncio Evasco Jr. at his office in the Parliament Hill in Ottawa. He also met up with Vatican Envoy and Permanent Observer to the United Nations in New York, Archbishop Bernardito Auza who visited Toronto in June 2017.

These are just a few of the many memories of the humble man I knew. He died on a Parliamentary trip to Colombia fulfilling his duties as a Senator. His sudden demise interrupted what was a strong voice along the hallways and corridors at the Parliament Hill for Filipinos in Canada and the world. His death muted our voices so it can be heard loudly and significantly. It was this man who allowed Filipinos to visit the Upper Chamber where symbolic photographs were made filled with smiling faces of proud Filipinos of all ages.

His life was an example of a true Filipino who persevered and prevailed even in the midst of many atrocities in his life committed by people who despised his climb to the top. He remained humble, friendly and true. I watched the silent wheeling of his casket to his final journey in a somber but fitting respect of a man now gone. Those of us who believe in his kind of leadership will pick up the torch where he left off and continue the legacy he has instilled in our hearts. When you are a leader in the community, no matter the capacity and volunteerism you shared will make a difference. Senator Tobias Enverga Jr. was a reflection of our many aspirations in life we wanted to achieve. He has served his people, his family, and his community.

Li ERON is a community blogger from Durham Region and host of Straight from Li ERON Radio Show.

Email: ligraphy@yahoo.com
Blogs: https://eronli.blogspot.com
Photos by Li Eron and from the Senate of Canada website